I stood there as confused as a kid could be.

My uncles rushed to the aid of my grandfather while he struggled in vain to steady the still listing ship that was my grandmother’s bulky frame; like asking a stalk of corn to brace a tipping fire hydrant.

The science of leverage was awkwardly defining itself in real time.

He was all of 6’4″, kind and gentle as any person you’d ever meet, she was a wide stump of a woman with an iced grey, evil dead eyed stare that could bend an I-beam and bring concrete to tears. And when she narrowed that laser like gaze occasionally turning her brand of affection towards me, the overly potent mixture of her rose scented perfume and stinging pain screaming from my cheek as she twisted it with a little too much pleasure….well, this kid learned early to keep a safe distance from that thumb and forefinger.

With the men shoring up the aft, pocketbooks snapped open and out came the doily edged hankies dotting the sweat now appearing on my grandmother’s brow and rouged cheeks. Dumfounded, I watched as my aunts dutifully smoothed away the upset in her rose printed sundress, surrounding her like handmaidens to a queen. I still didn’t understand what all the fuss was about. On the receiving end of my father’s own icy dead eyed stare, mom was admonishing Pretty Boy but she seemed as confused as I was. Neither of us had ever heard Pretty Boy say those words before.

I had no clue know what they even meant.

And there we all stood, suspended in an uncomfortable void of inaction, afraid to move or say a single word hoping this unpleasant catastrophe had finally subsided, hoping we could move on to the buffet to fill our bellies and forget it ever happened.

Pretty Boy, still bobbing and weaving along his perch and clear as day suddenly pierced the silence and proudly squawked another string of expletives to the crowd. But if the huge gasp that heaved deep from my grandmother’s innards were any clue as to how this all would end, you would have thought those three words like three poisoned arrows…. were aimed directly at her.

Unsteady again as one hand reached instinctively for the rosary beads in one of her two side pockets while the other found a gaudy gold crucifix on the heavy chain around her neck, up rolled her eyeballs as my grandmother began to breathlessly recite a mournful monologue of Hail Mary’s and Our Father’s in her native Italian. She held the crucifix in such a white knuckle grip pointing it at Pretty Boy as if Lucifer himself, sat on that perch cloaked in blue and white feathers.

Oh, it was quite the dramatic scene as she turned on her heels and thumped towards the door with my poor grandfather behind her gesticulating, endlessly apologizing with that familiar expression
on his face,

the helplessness that was forever creased in his forehead.

This act mercifully came to its conclusion as the rest of the family followed the mighty matriarch, heads down and mumbling as they corralled their children and shuffled out the door.

It was the last time any of them would ever visit our house.
.
.
.
Being the early riser it was my chore to remove the cover from Pretty Boy’s cage. I’d fill his seed and water containers and begin his daily chatter while teaching him some of my own sing song phrases.

lifted from the title of my favorite Richie Haven’s song playing constantly on the AM radio station that summer of ’67. Leaning close to the cage, I would let my waist length hair sift through the cage until it covered his head. Nibbling the ends a little. he waited for me to lift his veil of hair and repeat,

Our silly version of peekaboo. But Pretty Boy wasn’t waiting for me on the familiar perch near his little mirror that morning.

who could know then

the tenacity of innocence 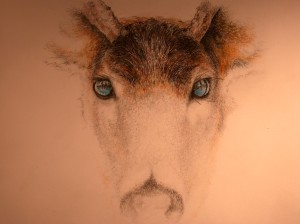 the first sound... and the last